Aschaffenburg, 15 September 2021 – Linde Hydraulics GmbH & Co. KG introduces its next generation of control valves. The new valve block VW 22/18 M5-03 for the open circuit is characterized by its modular system, whereby the Monoblock with five sections plus pressure relief section represents the basic set-up. Optionally, three additional sections can be added on each side of the block, thus specifically addressing customer needs.

Various functions can be selected for the additional sections, which are perfectly designed for the requirements in a wheeled excavator. In addition to proven options such as Boom or Lift- Regeneration, Anti-Drift and Return Flow Bypass, Linde Hydraulics now also offers Rod-to-Head-Regeneration and an innovative Float Function for the Excavator for the first time.

The Float Function has since been used mainly in applications with excavating functions, for example in the lift or bucket of a wheel loader – now it can also be used in excavators without much effort.

In conventional control valves, the actuator is fixed. In this way, it is rigid and cannot adapt to external conditions. In certain applications, however, it is desired that a cylinder yields to external forces by being able to retract and extend – the so-called floating function. This is particularly important when either increased wear of the attachment on a hard surface or damage to a sensitive surface by the attachment is to be avoided. A typical example is the unloading of bulk material on a ship, where damage to the deck is to be avoided.

In the context of control valves, the term “float” refers to the floating cylinder that can move without resistance due to tank relief on both sides. Thus, the function can enable a smooth workflow and less wear of the material.

Through an innovative solution, Linde Hydraulics implements the float function in the excavator with only a small additional piston in the valve. Compared to conventional solutions, the implementation is thus more space-saving and can also be used at lower speeds.

Rod-to-Head-Regeneration is used for cylinder functions with high flow and high actuator speed at a simultaneous low pressure level, for example in the excavator’s stick.

In an excavator, when the operator uses the joystick for fast and light movements, the full pump flow would be needed in conventional systems. This is exactly the effect that Rod-to-Head-Regeneration avoids and it eliminates the need for high pump flow.

The pump only needs to provide the differential flow between the rod and the head. Any additional pump flow above this amount now has a positive effect on the speed of movement of the cylinder. In this way, much more dynamic movements are possible with less pumping in the system. As soon as the load on the cylinder increases, the Rod-to-Head-Regeneration is automatically switched off.

Symmetrical valves with return bypass are used when functions are operated for long periods and require high flow rates – for example, travel drives in mobile excavators. A large part of the volume flow here is directed through the return tank bypass, which is controlled by a simple pin, via the reloading valves into the tank – and without significant flow losses. This allows noticeable fuel savings compared to conventional valves.

In addition, with this function, the make-up valves can draw additional required volume flow from the tank during downhill travel, thus avoiding cavitation. 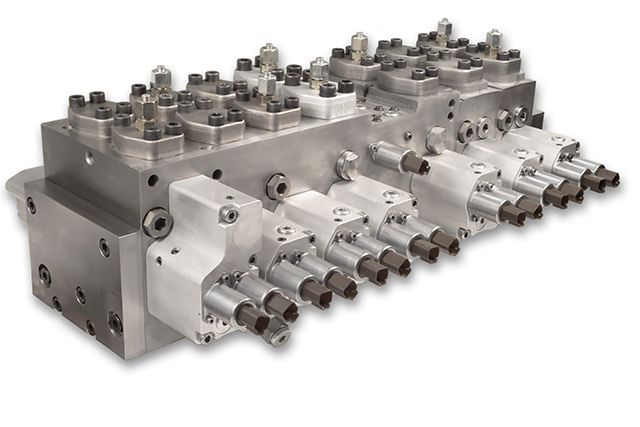 Anti Drift is used in lifting functions when a specific position must be secured and guaranteed to be held for a longer period – for example, in the crane operation of an excavator. The Anti Drift function uses an additional valve to prevent the leakage that occurs in conventional control valves. This valve is located between the control piston and the actuator and provides a seal depending on the actuation of the section.

Boom or Lift-Regeneration is used for lifting functions, such as the boom of the excavator. In this function, the weight force is used during lowering and the oil flow from the return of the lifting cylinder is partially diverted to the opposite side. In this way, the flow required here is already provided largely without pumping. In addition, the tendency to cavitate is eliminated. The flow saved in this process is thus directly available for other functions.

“The extent to which a hydraulic valve as a core component of the excavator determines not only function and performance, but also the fuel consumption of the overall vehicle, was demonstrated by us at an initial pilot customer. Consumption savings of up to 10% were seen in the field test,” explains Dr. Matthias Schreiber, CEO of Linde Hydraulics.

The third generation of valve technology is a suitable complement to the existing second generation (three sections) due to the compact five sections monoblock and is also perfectly matched to the wheeled excavator.

In the monoblock, Linde Synchron Control (LSC) is used as standard (post-compensated), while a choice can be made between pre- and post-compensated for the option sections. Both hydraulic and electro-hydraulic controls are possible.

The valve block is already in use at a pilot customer in a wheeled excavator and can also be used for material handlers.