More efficiency and flexibility with a comprehensive concept

The requirements for control valves today are complex and multilayered.
On the one hand, the construction machinery manufacturer demands a wide range of possible functions and a multitude of configuration options in a minimum of space. The focus is on the flexibility to implement the control valves into the individual installation environment with little effort and to adapt them to an existing system. On the other hand, the end user wants to effortlessly and precisely control various functions, some with widely varying characteristics, and thus achieve both efficient and convenient operation. Low acquisition and operating costs for the construction machine are the most important parameters.

Linde Hydraulics’ new concept takes full advantage of these aspects to meet the needs of both sides. The basic structure of the VW18M3-02 is a triple monoblock of nominal size 18, which can be extended with sandwich sections of nominal sizes 18 and 14. Not only the type and position of the controlled functions, but also the type of control can be freely combined. The arrangement of the control spools above the inlet flow ensures that all sections are supplied evenly with oil. In contrast to conventional control blocks, even functions with high flow requirements do not affect adjacent sections in this way. In addition, the larger cross-section and a more streamlined design of the passages significantly reduce flow losses. 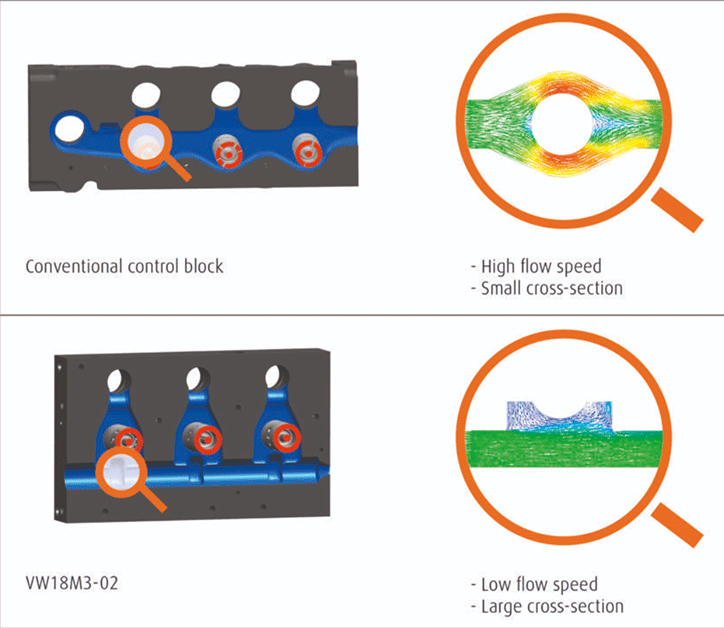 Flow conditions in the inlet flow

The control can be carried out in sections individually electrically or hydraulically. Due to the electrical control via a characteristic map, the behaviour of the control spool can be determined almost freely for each operating point.

Taking a mobile excavator as an example, a complex combination of cylinder and hydromotor functions can be implemented over a maximum of 12 sections. In addition to the basic functions boom, bucket and arm, which can be individually selected with adjustable lowering throttle or combined pressure relief and reloading valve, a slewing gear can be efficiently operated by means of a multifunction valve.
With a defined torque, the slewing gear can be accelerated and decelerated without the system being exposed to excess oil. This means, for example, that no oil has to be released via cross-over relief valves when the mostly heavy slewing gear is started up quickly, which considerably reduces the power loss of the system. When operating quick-coupling systems, the multi-function valve also allows the pressure and flow levels to be flexibly adapted to the requirements of the respective tool. The working pressure of the VW18M3-02 is controlled by a unit which accommodates the functions load sensing pressure cut-off, pressure boosting and unloading. Also, the tank/cooler valve, the tank/cooler pressure boosting and the cooler by-pass valve are integrated in the pressure protection unit.
In conventional systems, this range of functions usually requires additional, externally arranged components such as logic valves. The elimination of these components, however, not only significantly reduces plumbing costs, but also significantly reduces flow losses due to bends and elbows. In addition, a thermostat function can be implemented with the tank/cooler valve. The hydraulic oil bypasses the cooler during a cold start until the optimum operating temperature has been reached. In this way, the warm-up phase can be specifically shortened and fuel saved.
The flexibility of the valve design supports the project during commissioning by providing external adjustment options. The maximum flow, the lowering throttle and the pressure protection on the work port can thus be adjusted without having to open the system. In addition, the uniform oil supply to the individual sections ensures that additional functions can be easily retrofitted in the field without the need for a system readjustment.
Now that it has been put into operation, the user has the full range of functions at his disposal. This is due, among other things, to the type of control and the approach to implementing load sensing – through so-called downstream pressure compensators.
Electrically controlled, on the one hand there is the freely configurable characteristic, which can be used, for example, by the defined shaking of the bucket. Even without significant skill, the driver can use a button on a joystick, for example, to set the shaking in motion to distribute the gravel evenly over a surface. In the background, this function is controlled by an electronic controller with an appropriate program. If the driver changes the tool, he can change the setting of the multifunction valve remotely from the cab by a touch of a button.
However, even with a purely hydraulically operated VW18M3-02, the operator has access to a wide range of functions with different characteristics. Even functions with strongly varying loads, e.g. when moving the arm, can be controlled extremely precisely and sensitively by load sensing via downstream pressure compensators in the control spool. When passing through the lower dead centre, the load reversal of the arm is therefore not noticeable to the operator: the movement always remains uniform. When lifting the boom, however, it is important that the boom does not sag at the start of movement. Here, the pressure compensators also ensure that the connection between pump and work port is not opened until the required pressure level is reached on the pump side. 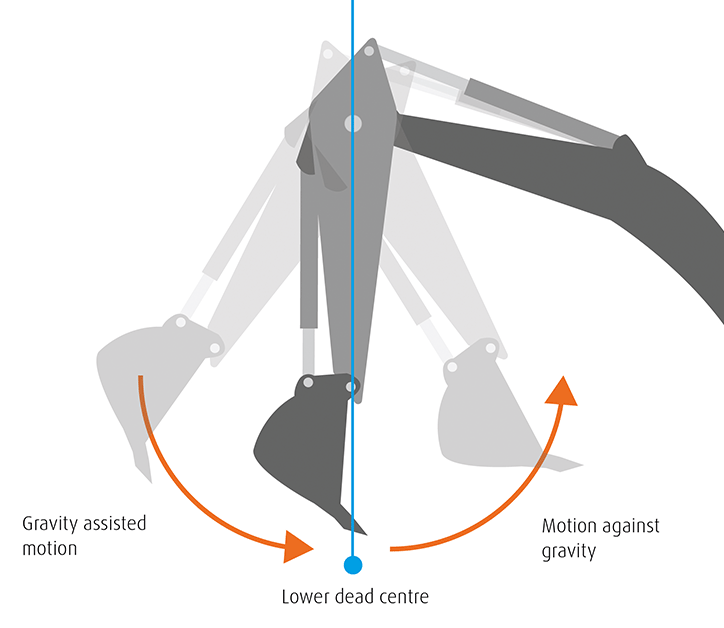 Variable effect of the gravity of an excavator arm during movement

As flexible as the VW18M3-02 can be adapted to a wide range of tasks, it is also suitable for construction machinery, not only excavators and material handling machines, where highly dynamic functions are sometimes required. The control block is also used in crane applications, where a particularly sensitive and precise control is a mandatory requirement.