Thanks to an innovative drive concept, container loaders are now saving energy on the airport runway. Manufacturer Laweco has been making use of components and system expertise from Linde Material Handling to implement this concept. The new “Green Line” truck resulting from the partnership uses much less energy, releases no emissions and, in comparison to conventional container loaders, is considerably more cost-effective to operate.

As soon as a passenger or cargo plane reaches its parking position, container and pallet loaders load and unload the cargo. These vehicles usually reach their destination with the aid of a diesel engine, while hydraulic drives are responsible for raising the platform, as well as numerous other drive and locking functions. 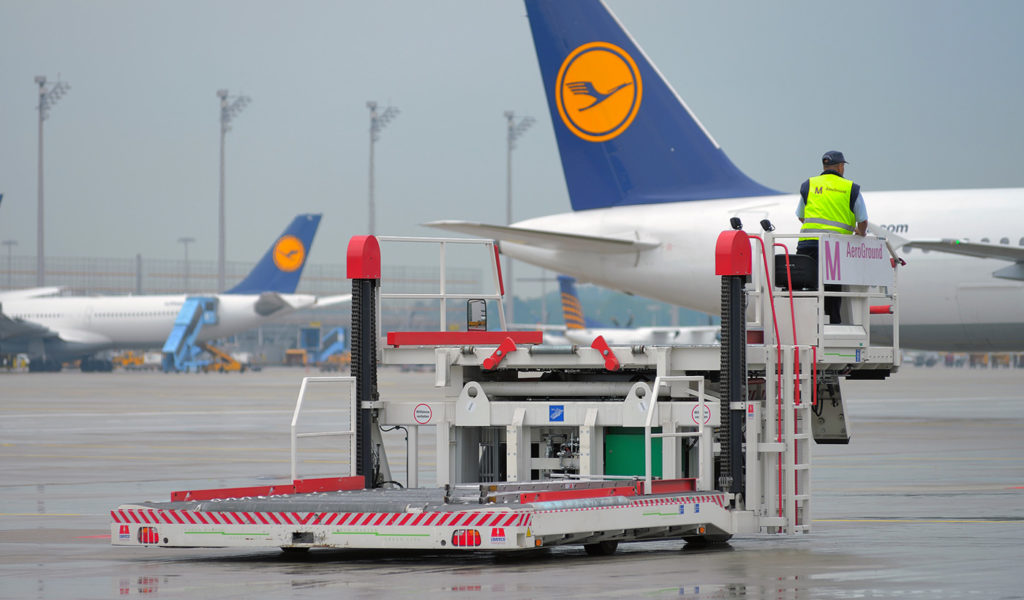 Laweco, a leading global supplier of these airport runway trucks, has now developed the “Cargo Master CML7 Green Line”, which features a new drive concept that dispenses with the need for a diesel engine. Instead, two 25-kW electric motors from the Linde product range form the main drive concept.

The electric motors in use have proven their reliability for tough forklift truck operations, as have the gear pumps connected to the motors; the gear pumps offer a displacement of 22 ccm/rev. The motor and pump combinations can convey around 115 l/min at 250 bar for several seconds at peak load which is more than enough to lift even the heaviest of loads.

The electric motors are powered by a lead-acid battery with a capacity of 930 Ah, while the on-board charger enables the battery to be charged independently of its location. A HMV 105-02 hydraulic variable displacement motor from the Linde Hydraulics range is integrated into the steering axle and and powers the traction drive . This motor is another component that has been proven to work in many other mobile applications.

While the solution uses relatively simple, tried-and-tested components “off the shelf”, complex engineering work was required at the control system level. Laweco commissioned system integrator Eriks, in collaboration with Jetschke GmbH—the Linde Hydraulics authorised dealer responsible—to complete this work. Jetschke has developed a multiple hydraulic block via which the container handler’s numerous functions are controlled — these include the option to position and tilt the loading bridge, conveying and turning the container, plus driving and lifting functions. The speed of the electric motors is determined by the level of power required, which saves energy and increases the service life of the motors and pumps. The LINC 1 controller from Linde Hydraulics converts the driving commands into signals that are transmitted to the two power modules (converters) and the electric motors.

This concept provides a whole range of benefits: The “ultra-slow” function provided by the Linde Hydraulics motor ensures accurate positioning at the fuselage. The energy released when the load is lowered can also be fed back into the battery. At a maximum lift height of 3.70 m and a load capacity of up to 7000 kg, a significant amount of energy is recovered. The cargo lifter operates at a very low noise level, and has no need for the conventional idle operation mode required by the diesel engine (which makes up around one third of the motor running time). The two motors are switched on separately as required,meaning they only consume energy when the drive and operating functions are actually being used.

After six months’ of field testing at Munich Airport, Linde and Laweco have achieved a thoroughly positive result: The operator of the first Cargo Master with “Green Line” drive technology saves 7800 litres of diesel per year, and the electricity costs are much lower than the fuel costs associated with conventional trucks. The decision by Laweco to use electric drives from Europe’s largest manufacturer of battery-powered electric trucks has so far proven to be a shrewd one.

Altogether, a “Green Line” Cargo Master saves energy costs amounting to 3000 litres of diesel fuel each year — these figures have been calculated by Laweco and confirmed in the field test. What’s more, other operating costs are also reduced, particularly maintenance costs. In total, the annual operating costs of a CARGO MASTER CML 7 “Green Line” are only half—or more precisely, 47%—of the estimated costs of operating a diesel-powered container loader. Operators of cargo lifters equipped with new drive technology make savings on the runway, but there are environmental benefits too as noise and exhaust emissions are drastically reduced.